All walks are over Triassic (205- 251 million year old) sediments in the inner part of the Sydney Basin. When these sediments were deposited, Australia was still part of Gondwana and connected to Antarctica, Africa and South America. Due to the northerly continental drift over the 200 million year period, the  present location of the NSW town of Bourke was then at the south pole.

The Sydney basin is a major geological feature that extends about 200 km. north, 100 km. west and 200 km south of Sydney. It also extends about 40 km. east of Sydney as a continental shelf. It contains dominantly sedimentary rocks and lesser igneous rocks (mainly south of Wollongong) ranging in age from 298 million (Lower Permian) years to recent. The Permian sediments were deposited in an alternating shallow marine and fresh water lacustrine (lake)/deltaic environment whereas the Triassic deposits were in a fresh water lacustrine/deltaic environment.

The youngest sediments (Tertiary to Recent clays, sand and gravel) are located near the centre of the Basin in the Cumberland Plain in western Sydney.

During the last ice age that reached its peak some 18 thousand years ago, the sea level was approximately 120 meters lower than it is today. Consequently the coast line was about 30 km further east and the present tidal waterways like Port Hacking, Sydney Harbour and the Hawkesbury River were river valleys into which mud, silt and sand has been deposited since then

The Triassic Group of sedimentary rocks has been divided into three Formations based on dominant grain size of component beds and their source direction as follows.

The Permian (251- 298 million year old) Illawarra Coal Measures are crossed by two walks that end at Austinmer (Walk Nos. 42 A and B)

There were two periods of post Triassic igneous activity. About 200 million years ago several volcanic pipes of breccia (diatremes) pushed through the sediments. These then weathered more easily to now form deep circular or oval depressions up to several hundred meters across.Two of these diatremes are crossed by Walk Nos. 59 and 62 at Sun Valley and by Walk Nos. 60,61 and 63 at Euroka . Walk Nos 6,7,10,16,17B,56,57 go close to three different diatremes that can be visited by means of a brief detour from the walk route. It should be said here that there is not much to see, other than a deep, thickly soil covered well vegetated circular or elliptical depression.

The second period of volcanism occurred only about 15 million years ago and involved the outpouring of basaltic lava. None of the walks encounter this.

Refer to map below for a more detailed geological map of the area covered by the walks.

Degree, rate and timing of tectonic activity as well as variations in susceptibility of weathering are the key determinants of topography (geomorphology)

Nearly all the walks are in flat or almost flat lying sedimentary rocks where weathering is the key determinant of walk profiles. Thus the Wianamatta Group sediments , consisting mostly of shale, siltstone and claystone, are deeply weathered to soil and clay. Their presence may only be recognized by the presence of good thick soil on ridges. The original rocks may only be exposed in road or rail cuttings.

The Hawkesbury Sandstone on the other hand is mostly composed of quartz sand grains cemented by silica or clay and is much more resistant to weathering. It tends to form cliffs and boulder talus scree. Softer interbeds of shale or siltstone tend to form terracing between sandstone cliff lines that may be repeated at the same level on both sides of a valley in flat strata.

The Narrabeen Group sediments, only encountered in the lower portions of the southern walks, again comprise shale, claystone, siltstone and sandstone interbeds and tend to form more gentle scree slopes beneath the Hawkesbury sandstone cliffs. It does, however, also contain some thicker sandstone beds that may form low cliffs.

Other than some gentle warping of strata in the northern part of the walk area (Kulnura Anticline) that is hard to recognize during a walk, the dominant tectonic event was the uplift of the Blue Mountains 60-90 million years ago and the creation of the Lapstone Monocline, a distinctly upward tilting of strata between Emu Plains and Glenbrook centered at Lapstone. The tilted strata is clearly visible in an old railway cutting during Walk No. 50 and to a lesser extent in Glenbrook Gorge during walk No 55.

One interesting feature of the Blue Mountains uplift is that it was slow enough to allow the existing larger drainage system to be maintained. Thus the Warragamba, Glenbrook, Grose and Colo rivers were able to keep pace with erosion during the uplift to form gorges. 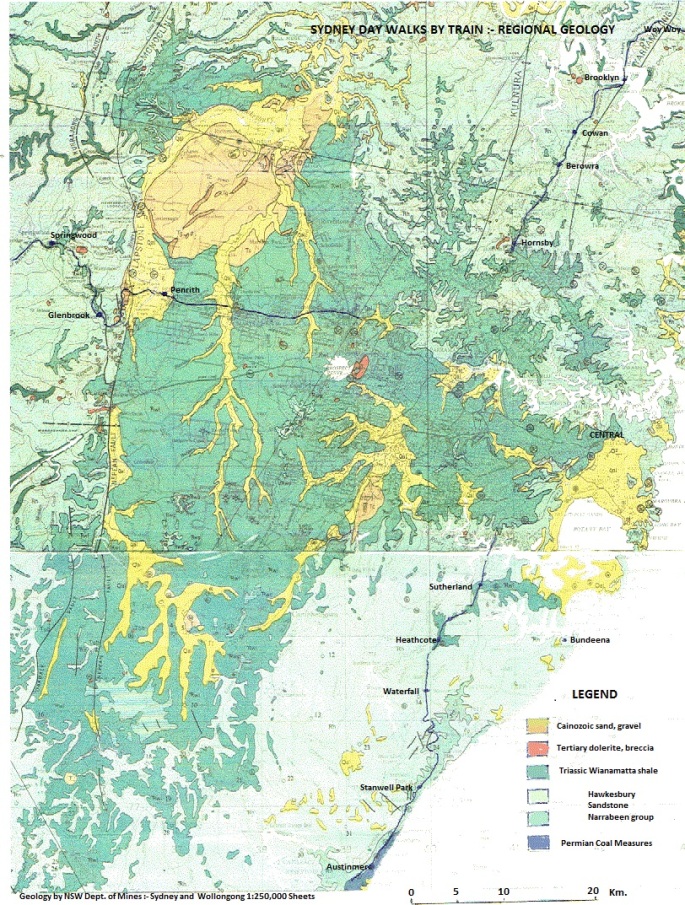 Cave overhangs :- A common feature seen on many of the walks where a near vertical cliff is undercut by the erosion of softer strata like shale, siltstone or poorly cemented sandstone. Erosion was by a combination of wind and water through saturation and possible freezing. 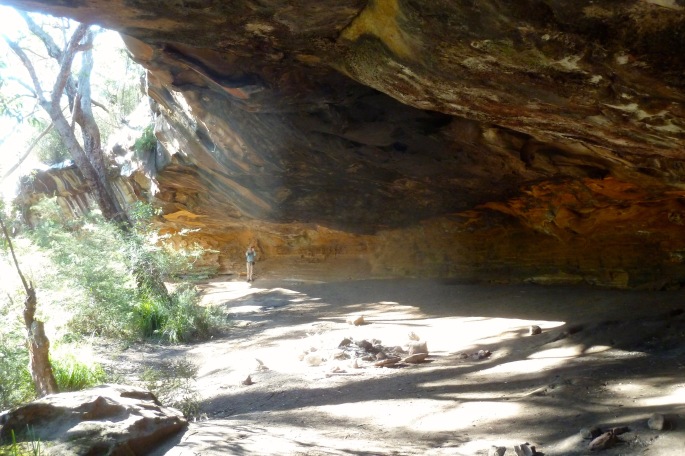 Concretions :- Hard compact layers of iron cementation in sandstone, usually less than 1 cm. in thickness along joint or bedding planes but also as ovoid, spherical or irregular bodies formed by solution and deposition of iron during weathering

Liesegang rings:- These are commonly seen rust coloured concentric or sub-circular rings in sandstone. They are formed by diffusion and selective deposition of iron products during weathering. There are several theories on the geochemistry involved in their formation

Honeycomb Weathering:- An extensive honeycomb-like network of small cavities several centimeters across in softer sandstone commonly under a harder sandstone overhang. May be formed by seepage of and then crystallization of salt solutions.

Current bedding or false bedding:- This is a very common occurrence in Hawkesbury Sandstone and as intense steeply dipping bedding but easily recognized as false bedding because it is always confined to flat lying (true dipping) beds in the sandstone. Occurs in most of the walks

Case hardening:- Mostly seen in large sandstone boulders where the mid-grey surface is hardened with the softer lighter coloured inside hollowed out to form a cave. Caused by weathering whereby the silica of the sand grains is partly dissolved and re-deposited in the gaps between the grains or by the leaching of salts from the clay between the sand grains to leave silica

Pot holes in creeks and sea platforms:- These are formed when harder pebbles or cobbles of rock are swirled around by waves or fast flowing stream to grind away the surrounding softer rock and thus form ever wider and deeper holes. The most famous pot hole seen on these walks is the Figure 8 Pool (Walks 23 A and B)

Tesselated sandstone:- Seen in some flat or gently sloping solid sandstone outcrops as cracks arranged like an irregular checker board. Formed by saturation of sandstone, then shrinking upon drying out. Cracks extend for less than 1 meter into the outcrop. Seen on Walks 16 and 17B 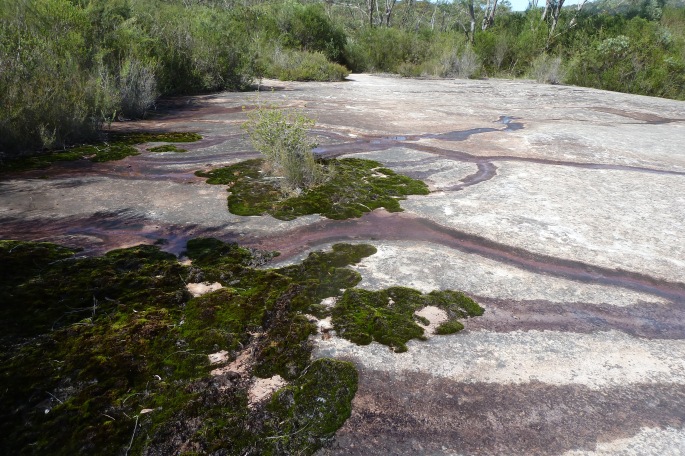 Massive sandstone without bedding planes :- In the Hawkesbury Sandstone, these are thought to have formed from a massive release of stored water eg the breach of an ice dam from a south western source area. Seen mainly in the northern walk area on Walks 16,17B, 18 and 19

Laterite:- A hard red brown ironstone formed by intense weathering and leaching of shale, clayey sandstone or basalt under humid conditions. It can appear as hard boulders or outcrop. Common on ridges formerly occupied by Wianamatta shale. Very prominent on Walks 29, 33, 37A along fire trail between Waterfall and Uloola falls; also on ridges near Heathcote and Engadine.

Joints:- A joint is a natural stress fracture, usually near vertical on these walks, that divides a rock mass into two sections without relative parallel movement. Joints usually occur in near parallel sets and can influence weathering and erosion to form smooth cliff faces. Present in Hawkesbury Sandstone on many of these walks 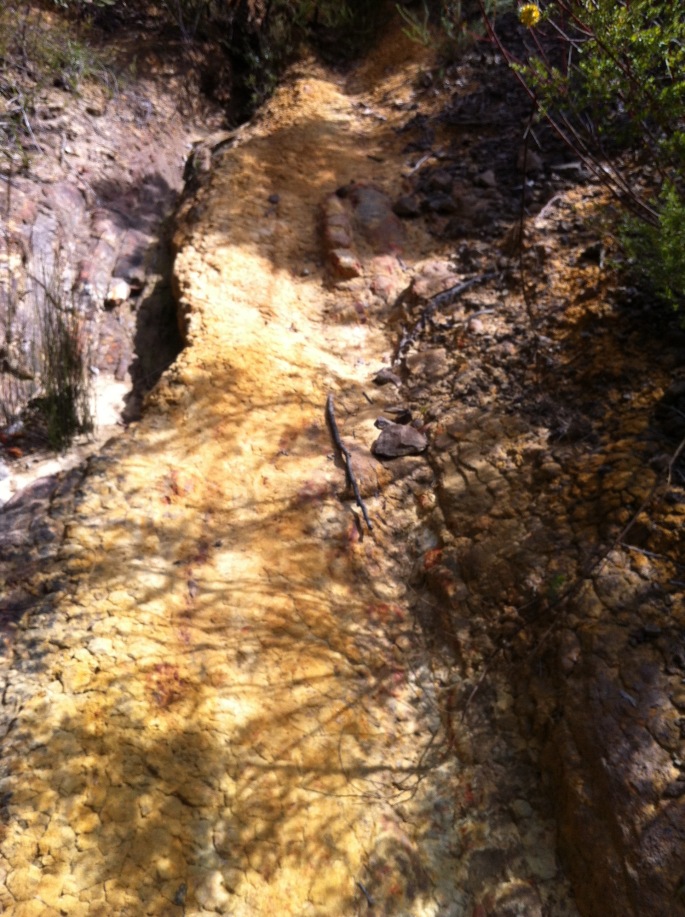 Dikes:- A dike is a joint that has been pushed apart and filled with intrusive igneous material. Visible in two locations during walks 16 and 17B where the igneous material has weathered to clay and iron stone 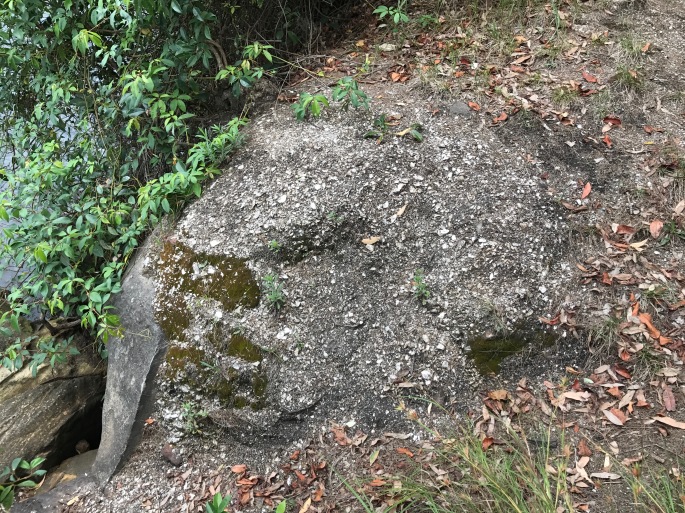 Kitchen middens:- Bleached shells in soil seen on some low ridges in the tidal sections of Berowra and Cowan Creeks. These are aboriginal kitchen middens, probably close to a former camp site and less than 10,000 years old.

These tidal sections of Berowra and Cowan Creeks are drowned river valleys that were inundated after the last ice age.